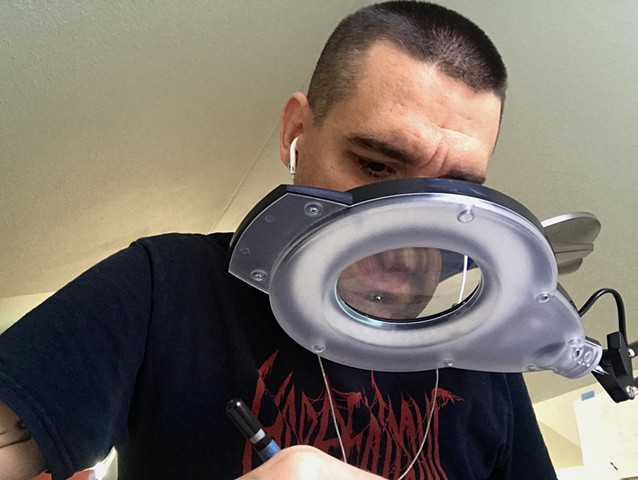 Ben Moreau was born in Portland, Maine, and earned a BFA in printmaking from the Maine College of Art in 1999. He attended the University of Wisconsin-Madison where he was awarded an MA in studio art in 2002, and an MFA degree in 2003. Ben taught at Western Washington University from 2006 to 2015 where he taught all levels of printmaking. He has also held teaching appointments at the University of Wisconsin-Madison, Tacoma Community College, Shoreline Community College, and North Seattle College. Additionally, he served on the board of directors of Seattle Print Arts from 2013-2017. Ben has an extensive national and international exhibition record, and his works are found in the permanent collections of the Syracuse University Art Galleries, the West Virginia University Art Museum, the Weisman Art Museum at the University of Minnesota, and at the Fogg Art Museum at Harvard University, among many others. He is represented by the Davidson Galleries in Seattle, Washington, where he currently lives and works with his wife and two sons.